I first observed it in Amsterdam, relaxing in friend’s motorboat as we pottered around town and out into the countryside south of the city. It must have been 2009 or 10.

All afternoon, lying back in the bow, I watched plane after plane laying down white trails in a blue sky — trails which twisted like ribbons, ruffled at the edges, spread out and formed a haze. By early evening it had grown into comprehensive cloud-cover.

I’d read about this phenomenon – ‘chemtrails’, they called it – but I’d never witnessed it myself.

How many times have you heard someone say: I would never have believed it, if I hadn’t seen it with my own eyes?

But the there’s the old Mafia saying: If I hadna believed it, I wouldna seen it.

Which one is right?

In his 1922 book Public Opinion, Walter Lippmann argues that the interaction between memory, imagination and visual information is essential to the act of seeing.

“We are told about the world before we see it. We imagine most things before we experience them…

And those preconceptions, unless education has made us acutely aware, govern deeply the whole process of perception […]

For the most part we do not first see, and then define, we define first and then see.

In the great blooming, buzzing confusion of the outer world we pick out what our culture has already defined for us, and we tend to perceive that which we have picked out in the form stereotyped for us by our culture.”

For me, the more arcane mystery lies in the converse act of not seeing. What the culture has not defined for us, we may not perceive at all.

I was living in Bangkok at that time, and a friend’s apartment had a great north-westerly view of the city skyline and out towards the airport. Again, I saw planes laying trails, which spread and merged and formed a haze, rolling out over the city. In England a couple of years later, spending the summer with my father, I was shocked – the spraying was much heavier than I’d seen before, and seemed to be happening at lower altitudes. I was seeing big, fat, smoky trails like great hazy caterpillars. I saw it in Berlin two summers ago, and again in Malaysia a year ago, where it was just as thick and heavy: great hanging nets and sheets of dull white, visible in the gaps between the cumulus. I haven’t been anywhere in years where I haven’t seen it, except for Sevilla in Andalucia where there was a little jet-scuzz over the airport but the rest of the sky an intense unbroken blue as I remembered it from twenty years ago.

Once Bangkok had chewed me up and spat me out, I dragged myself to Ho Chi Minh City, where I rented a skinny little house behind a temple in District 3. There, my life had a soundtrack of temple drums, bells and chants. Not much sky in those narrow streets. After a year, once my relationship with the cockroaches and ghosts had reached an all-time low, I moved to a light, airy modern apartment with acres of window, a mile outside the city.

The enormous living room had a fourth wall composed entirely of glass. Now I saw it every day. Not always jets in the process of laying down lines, but every morning a drift of trails, and shapeless mats and veils of the stuff blowing in across the city from the sea. Alumino-cirrus, occluding the sky as the day went on, lurid as neon at night. Some nights as the sun went down the whole sky would ignite like a furnace.

You can look at a sight like that and perceive whatever has been defined for you. But seeing must surely, at the very least, be wondering. 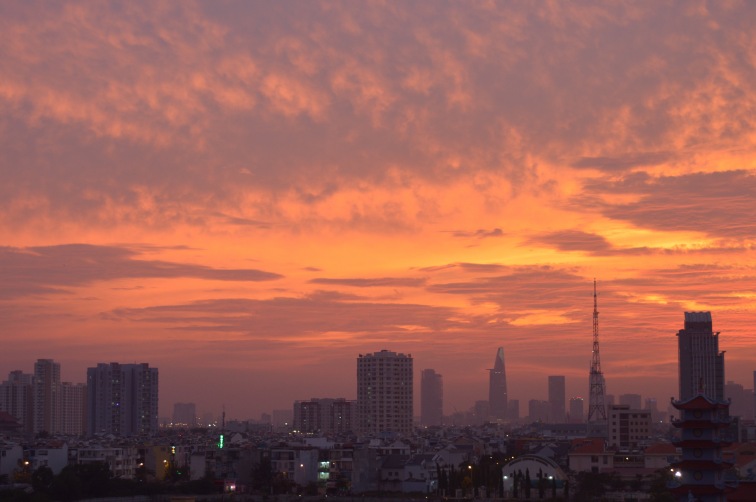 NEXT: 2 KRISTEN MEGHAN AND THE APPEAL TO IGNORANCE