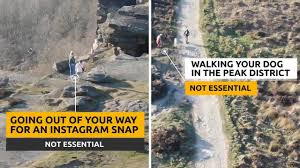 It’s the absurdity that bites.

These slave masks. These gags.

Chalk squares on the playground.

Social distancing robots in the parks.

Instructions to stand in the corners and face away from each other in lifts.

The sheer reach of this insanity. The pettiness of tyranny. The insistent tang of psy-op.

The Empire loves to inflict absurdity.

Something happened early in all this that has stayed on my mind, perhaps because it happened where I spent a significant portion of my adult life — a very beautiful part of England known as the Peak District.

“It was a surveillance operation to make the CIA or MI6 proud. A high-tech police drone hovered above the mountainside, spying on a couple, suspiciously alone and surrounded by wilderness.

But the two people caught in the police sting were not international terrorists, significant figures in an espionage ring or drug-dealing masterminds.

They were worse than that. They were “walkers”.

To be precise, they were “dog walkers”.

Derbyshire Police released footage taken by a force drone flying over Curbar Edge, a beauty spot in the heart of the Peak District. There were the hikers in full walking gear — boots, coats and even sun hats — and accompanied by what appeared to be, from the high-up vantage point of the drone, a golden Labrador….”

The shaming of fell-walkers might seem trivial, but whether it’s a conscious strategy or just the natural instinct of authoritarians, the infliction of irrationality is a weapon. The more absurd the command, the greater the test of conformity. The greater the pledge of loyalty to the empire of the absurd.

For years we’ve been throwing away our drinks in airports, in case they are liquid bombs. You can unscrew the cap and drink it to show the guard that it’s water, but you’ve still got to hand it over. This despite the fact that a liquid explosive is a binary weapon that requires laboratory conditions to activate — precise refrigeration and a centrifuge. Not something you can whip up in the toilet of an aeroplane.

Even mothers carrying bottles of their own expressed breast-milk have been made to give them up.

The cult of absurdity is the religion of Empire.

The enlistment of the unthinking masses in the assault on reason. When you see them in their masks, you know what you’re up against, the depth of conformity, the universal shallowness of thought.

That masked driver who passed out for lack of oxygen and drove into a tree should be given the Empire’s highest decoration, posthumously if necessary, for selfless devotion to absurdity. What a fine example to others. If only all servants of the Empire showed such dedication.

The lockdown turns us all into Vladimir and Estragon. Waiting, waiting, waiting. Rituals, routines and familiar games, while the world outside goes mad. A theatre of the absurd, while the rules of probability, causation — and microbiology, apparently — go haywire.

Absurdity is the tell.

The drone images, taken from hundreds of feet in the air and disseminated across the media by the police to ‘shame’ the culprits, show a couple surrounded by literally miles of open space. What could be more socially distanced than that? Where is the infringement?

But that’s not good enough for the Empire. Hand over the breastmilk, it could be a bomb.

Not essential, said the police, over and over again. And that tone of sarcasm, the reference not to a ‘photograph’ but an ‘Instagram snap’ — the contempt, the insolence of office.  When the police start to editorialise, we know we’re in trouble.

‘Not essential’. What do the police know of essence? 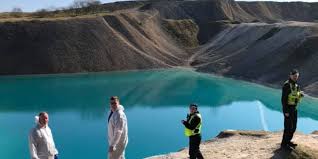 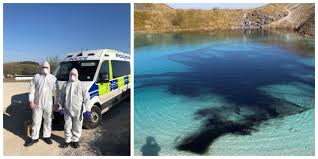 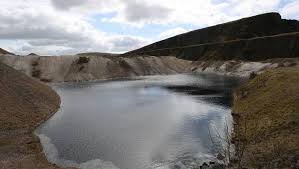 A few days later, officers from the same force were at a beauty spot known locally as the Blue Lagoon. The disused quarry at Harpur Hill, Buxton, is popular with visitors and locals because of the beautiful colour of its water. People like to swim there, or rest on the banks.

We can’t have that, though, can we? People have to stay home. The countryside is closed. So the police went there with drums of chemical dye and stained the water black, to discourage swimmers and visitors.

When challenged in the press, they justified their vandalism by claiming that they do this regularly. Why? Because the water is toxic and can cause skin irritation so it’s not a good idea to swim in it.

That’s a defence? So put a sign up, if that’s the case! You don’t have to disfigure the place with chemical dye. But in the nanny state, the police are immune to shame. The aficionados of absurdity will decide what’s essential.

Maybe getting out into the landscape is essential. Maybe it’s the way to stay in touch with reality, to reach beyond the absurdity of the human condition, to escape for an hour or two from this Theatre of the Absurd, the human theatre, the global theatre of human authority, where there is no space either for the rational or the divine.  To be in the terrain, not the empire’s distorted map.

There were times, queueing in endless snaking lines for passport control in airports, when I could only think of concentration camps. Cattle queuing for the abattoir.

I had a friend once who drove trucks and sometimes he would have to drive cattle to the abattoir. When he turned off the motorway, a mile from the slaughterhouse, the cows in the back would all start screaming.

I knew this was coming — or something like it — as so many did. We could smell it.

But what is sadder, screaming cows or the silent humans who long ago lost their sense of smell?

Render unto Caesar what is Caesar’s, said the man. The trouble is, it doesn’t end with coin. Soon Caesar demands your daughter and her unborn child. Soon he demands your humanity.

George Orwell’s 1984 is a hero versus monster story in which there is no longer any possibility of the monster being overcome; in which the hero is already in the belly of the beast. The question is not who wins — the question is how to stay human. That’s why the Party doesn’t just kill Winston. If it did that, he wins, because he has remembered what it is to be human, and staked his life on it. The Party must dismantle that memory.

The motive for trying to deny free humans the right to wander in nature is no mystery, it’s a tell. It tells you all you need to know about this global fascist coup. It tells you what they want to do, which is to take me and you out of the natural world and turn us into pod people, warehoused in ‘smart’ cities, installed us in an internet of things, denatured and dehumanised, diminished and controlled, a mere remnant of what we were.

I’m lucky enough to have spent the lockdown in rural Isan, Northern Thailand. There’s a curfew here but no lockdown. Every day I drive to a lake that nestles under the hills of Phu Wiang.

My partner’s cousin died here as a teenager, saving two kids who’d got into trouble in a canoe.  So she won’t come with me. But usually there are other people, teens who drive their bikes out along the spit which extends into the lake, to throw themselves into the water, laughing and screaming. Their voices carry across the water. I don’t mind, though it’s nice when I have the place to myself, as often I do if I come in the late afternoon. Socially distanced across the water, they are no threat to me.

But if this was the UK, would police come with drums of black dye, to save me from myself?

My feet sink into the mud at the water’s edge. I take three sucking steps, bend my knees and launch myself into the water. The luminiferous aether, rippled with energy.

The water is warm as a bath on the surface, cooler underneath.

Waves propagate in all directions. I am a perturbation in the aether. My eyes receive the natural angles of light, the angels of light.

Bamboo poles mark the fishermen’s traps. On a rocky outcrop, seventeen herons with grey bodies and black wings stand and sun themselves.

A cormorant sits on a post. Swallows turn like keys in the air. Water boatmen skim the surface, held in its tension. Dragonflies with glints of gold step through the air.

And everything says, remember what you are.

Those who are still human reach out to the source.

Those who are simulacra are focused on us. They can’t leave us alone. Without us they are nothing. That’s why they will keep some of us ‘alive’. It’s the envy of the simulacrum for the real, the wannabe for the is.

This universe is built on opposing forces. Evil is part of the Logos, the logic; it’s just the way it is, the only way it can be. There is nothing without God. In the belly of the beast, remember what you are. Pray:

(The dua of Sayyidina Yunus when he found himself in the belly of a fish.)