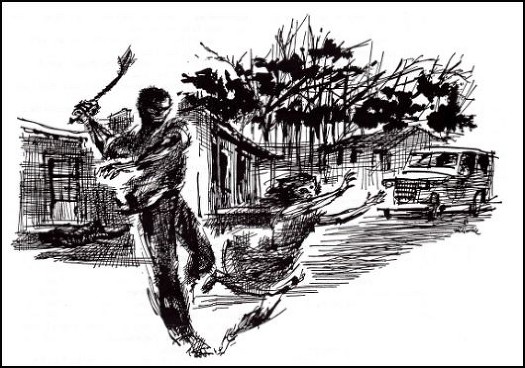 Dissimulation has been at the heart of the terrorist tactic from the beginning. If you terrorise people, you will only solidify the political resistance against your aims — making it impossible for officials to entertain your demands. Terrorism, therefore, is not an effective tool, and terrorists rarely realise their aims. It is only effective when deception is used to misattribute the event, passing it off as the actions of a designated enemy whom you wish to discredit or attack.

An early instance of false-flag terrorism using weapons of mass destruction happened more than four hundred years ago at Westminster, the seat of the Houses of Parliament in London: the fabled Gunpowder Plot for which the patsy Guy Fawkes and others were tortured to death. Contemporary witnesses reported seeing the principle conspirators making late-night visits to the house of Robert Cecil, James I’s Machiavellian first minister, whom Shakespeare had lampooned in the morally and physically deformed character of his Richard III.  The aim was to discredit the Catholics, forcing the King to distance himself from them, and it worked.

In the post-Second World War period, the deliberate creation and empowerment of terrorist groups was a tactic evolved by the British for asymmetrical warfare between a collapsing empire and the independence movements arising throughout its colonies. In 1947 the British faced a severe challenge in Kenya with the growth of the formidable and widespread Mau Mau insurgency. A colonial field operative, Lieutenant (later General) Frank Kitson, chose not to oppose the Mau Mau head-on, instead developing what he called ‘counter-gang’ and ‘pseudo-gang’ tactics.

The procedure began with mass-arrests and interrogations, looking for those who could be ‘turned’, and then used as informers and infiltrators — but also for hard-core criminals and psychopaths who would be deployed to commit massacres and atrocities  against the population under the Mau Mau name, destroying the rebels’ political base — a ‘pseudo-gang’, in Kitson’s nomenclature.

His methods were successful, the Mau Mau challenge was dissipated in chaos and confusion, and Kitson was re-deployed first to Malaya and then to Northern Ireland, where he infiltrated the Irish Republican Army to such an extent that at one point a Belfast newspaper claimed to have seen secret documents revealing that nearly half of the leadership of the Provisional IRA consisted of British informers. At the same time he empowered Unionist paramilitary counter-gangs to terrorise Catholic areas, further inflaming the situation.

Levels of violence did not diminish under these circumstances — in fact they peaked, culminating in some of the worst atrocities carried out in the name of the Republican movement. The violence, of course, brought Irish reunification not one inch closer.

Kitson described the genesis of his methods in a 1960 book, Gangs and Counter-gangs. Within two years, in the United States, domestic false flag terror-tactics were proposed at the highest level as a way of justifying an invasion of Cuba. In 1997, documents relating to a 1962 military plan code-named Operation NORTHWOODS were declassified in the United States. The Joint Chiefs of Staff under the chairmanship of General Lyman Lemnitzer had submitted a proposal to Secretary to Defense Robert MacNamara for the deployment of false-flag terrorist attacks across the USA, to justify an invasion of Cuba.

The wave of attacks would begin with a simulation. The public would be shown televised scenes of idealistic young ‘students’, actually CIA recruits, boarding a flight to Cuba on an unprecedented cultural exchange. The plane would take off, but then land at a military base, to be replaced by a remote-controlled duplicate painted in the appropriate colours. This drone aircraft would broadcast pre-recorded emergency messages as it approached Cuba, before crashing into the sea, shot down by imaginary Cuban MiGs, with the loss of all lives. TV would show mournful scenes of wreckage and belongings floating on the sea. This pseudo-event would just be the curtain-raiser; ships would be sunk; the US military base at Guantanamo would be attacked; people would die in acts of terrorism across the USA. There would be a media circus of televised funerals, biographies of victims and interviews with grieving relatives. The country would be ready for war.

The most shocking aspect of this is of course the punch-in-the-guts revelation about military ethics, but there’s something even more important here too: what it tells us about the role of the media. Essential in the plan is the assumption that the media will be complicit in promoting a made-for-television enactment as reality. A member of the public might not believe that the press can act in this concerted fashion to promote a false reality; the Joint Chiefs of Staff, on the other hand, clearly do.

Terrorism achieves its aims only by disguising its source. Kitson’s ‘pseudo-gang’ strategy is about creating surrogate insurgent groups to destroy the political base of those threatening the dominant order; it replicates the threat in order to replace it: it uses simulation to effect political containment or change. Clearly, if the Cuban regime had really shot down a plane full of students and started terrorising the mainland of the United States with snipers and bombers, it would have faced immediate destruction. So the Cubans wouldn’t do it. But the United States would, in the guise of Cubans, to justify an invasion.

President Kennedy apparently didn’t like the idea of slaughtering innocent Americans in order to go and slaughter innocent Cubans, and not only vetoed the plan but made sure that Lemnitzer was denied a further term as Chairman of the Joint Chiefs of Staff. Instead, the general was reassigned to the European theatre of operations as Supreme Commander of NATO (1963-69).

At which point, as it happens, the very real terrorism of NATO’s own ‘pseudo-gangs’ was unleashed in Europe in the Piazza Fontana in Milan, as the Euro-Disneyland of terror opened its gates for the first time in 1969.

The question is, have they ever closed?

NEXT: 6  MCLUHAN IN MANHATTAN

“Instead of tending towards a vast Alexandrian library, the world has become a computer, an electronic brain, exactly as in an infantile piece of science fiction. And as our senses have gone outside us, Big Brother goes inside. So, unless aware of this dynamic, we shall at once move into a phase of panic terrors, exactly befitting a small world of tribal drums, total interdependence, and superimposed co-existence. […] Terror is the normal state of any oral society, for in it everything affects everything all the time.”